Brooke is a very quiet, polite girl who barely speaks her mind. Although it seems she is asleep, she's not. Brooke is the most creative out of all the Extraordinaires, but she doesn't like to show it. She spends most of her day zoning out and daydreaming and thinking of creative ideas. She is almost invisible in the Mains, for most of them don't notice her and her silent personality. She is often forgotten (and Kat angrily reminds everyone that she is there). She hesitates in every choice, thinking her opinion is irrelevant. Brooke is also very fickle. When she does say something, it's either asking to repeat what they just said or a inspirational quote. In the first few years of being a Main, she referred to herself in third person until she grew out of it. Brooke dislikes being in the spotlight, yet she dislikes being ignored. She wants to be left alone yet she wishes she was noticed. Brooke mentions she likes beignets. 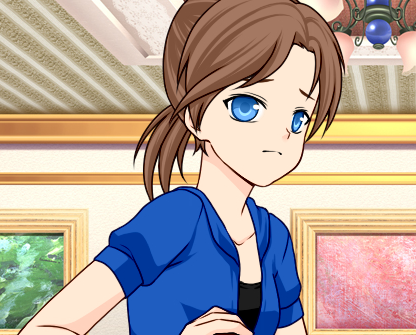 .png|thumb|288x288px|Young Brooke. ]] Brooke has a still, serious face and blue eyes that are usually blank or cast downward. People often mistake her for looking worried. Her wavy brown hair is pulled into a loose ponytail. She wears a short blue T-shirt hoodie that exposes the belly of the shirt underneath. She wears blue Capris, grey high-tops, and grey sweatbands on her wrist. When Brooke was younger, she wore an identical outfit.

Brooke is a water and ice summoner, meaning she uses water/ice spells as well bending them. She uses a quarterstaff for a weapon, using it has a base for her magic. When she uses her disappear tactic, she vanishes and appears in a puff of mist, sometimes snowflakes depending on the weather.

Brooke usually has a huge pelican, Poke, to ride on. Hunter had summoned him for her in an attempt to impress her. Now Brooke and Poke are very close. Poke is shy and modest like Brooke, and supposedly has a mate and offspring. Since Poke is a summoned animal, he appears and disappears only when Brooke needs him.

- Ironically, Brooke had almost drowned in training, giving her a fear of water until Master An had to teach her how to swim.

Retrieved from "https://crescent-islands.fandom.com/wiki/Brooke?oldid=683"
Community content is available under CC-BY-SA unless otherwise noted.